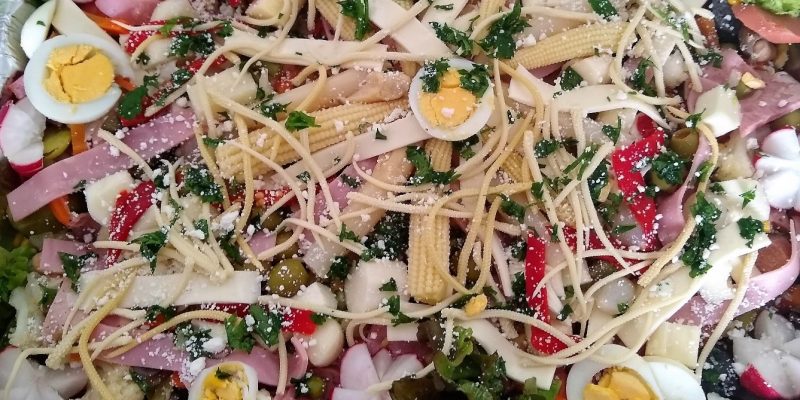 All Saints’ Day and Day of the Dead Celebration

A meal we eat during Día de los Muertos, (Day of the Dead), in Guatemala, has a lot of meaning in our culture. Called Fiambre, it creates a magical bond between the living and the ancestors. It is a sacred food that symbolizes this bond. Rituals and sacrifices honoring the dead, were popular in pre-Hispanic times, the symbolic meal offered to the deceased in Mesoamerica were celebrated in the month of July when the Mayan New Year began.

This commemoration was lost but it reappeared in the sixteenth century, already syncretized with the catholic traditions, when the Spanish arrived, back in the colonial Guatemala, they celebrated all Saint´s day with special meals cold meats and vegetables, that were cooked with culinary techniques that they inherited from the time of the Arab occupation of Spain.

With the process of mixing the indigenous culture with that of the Europeans and bringing together cultural and religious elements, the colonial Guatemalan population of the late sixteenth century, created that magical dish, The Fiambre. It is served cold and enjoyed on November 1 and 2 in celebration of the All Saints’ Day, together with the Day of the Dead, to close the cycle of festivities.

This dish is mentioned in conventual recipes of the early seventeenth century and in the chronicles of Tomas Gage between 1625 and 1638. The Fiambre meal is a symbolic and exquisite food for its baroque style and cooking methods. It expresses cultural heritage, the world view and the way of seeing the Guatemalan world made up of Spanish, Mestizo and Maya influences. It is truly a representative element of multi-culturalism in our country.

By preparing Fiambre, we are putting together the multi-ethnic identity of the Guatemalan: The use of local vegetables and seasoning that are Mayan, thus of pre-Hispanic heritage: the use of different types of meats and sausages of Spanish descent and the use of cheeses, capers, artichokes, olives and other spices from the Arab  influence, and as a special touch, it hides the culinary secrets of the Guatemalan cooks  (or Guatemalan kitchen)

This meal is prepared for the Day of the Dead, relatives together with the closest friends of the “finados”, (dead) are taking the fiambre, to the “Campo Santo” (Cemetery) and share between the them. It is tradition to spend the 1st. of November together in the cemetery and bring flowers, offerings and serenades to their death relatives and friends.

During the celebration, all cultural elements are mingled together, such as the use of water, fire and vegetables.  According to pre-Hispanic beliefs, this mingling is expressed as water carried to the deceased, smoking tobacco and drinking alcohol in the “Campo Santo”, preparing meals and use all these elements as offering to the deceased, and presenting it on top of their graves.  In some places the sky becomes filled with color as people fly giant kites as symbol of connection with the deceased, like the famous Sumpango Kites or Santiago Sacatepéquez kites,

Thus, Guatemalan Fiambre begins as an offering and sacrificial food as well as a means of communication with the ancestors. (for the Catholics, the Day of the Dead is a day of prayers, for those who are waiting in the purgatory for redemption)

The preparation of the Fiambre’s cold cuts is an activity that bring families together and this is how the tradition is passing from generation to generation, that occurs during preparation when cutting vegetables, sausages and other ingredients. Guatemala has different types of cold cuts according to the regions or culinary variants of the cooks.

The Fiambre is an ancestral heritage and not an improvisation of some nuns or cooks as was previously speculated. This dish is one of the most important meals the country has brought to the world, probably one of the most exquisite in Latin America for its unique form of creativity, demonstrated by the incorporation of products so different to the palate and of such diverse origins.

The Fiambre is a sort of salad, that has more than 50 ingredients, depending on the region where is prepared.  It has a mix of vegetables, cold meats, artichokes, capers, pickles, cheese, etc. seasoned with vinegar, olive oil and fresh herbs like rosemary, thyme, oregano, etc,

Colorful, tasty, unique.  Fiambre is the intangible patrimony of Guatemala.  There is nowhere else in the world where you can taste this dish.