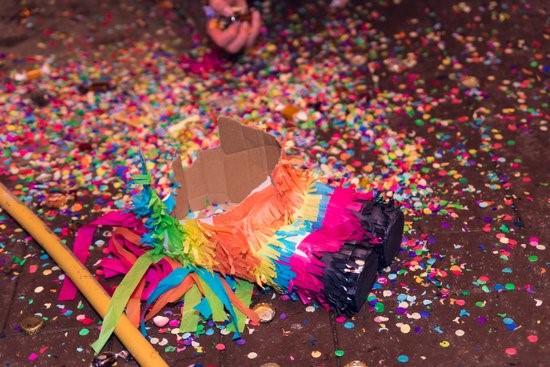 January 9, 2019 • By DOS LUNAS • Posted in Travel Guide • Comments Off on The Guatemalan Piñatas

You may or may not have seen them, but in Guatemala piñatas are a strong tradition; a must have for every birthday party, especially for children.  Piñatas are among the most important part of the celebration.

If you host a “piñata” you better stuff it with candies, lollipops, chocolates, plastic toys, and you can add money if you like!  Otherwise you will be highly unpopular with the children and their parents.

For a birthday party, all the participants wait for their turn to hit the piñata with a wooden stick.  The first shot is for the birthday boy or girl.  Their eyes are covered, with the idea of making it difficult to break the piñata so that the rest of the kids have a chance to hit it.  After the poor piñata is crushed, all the candies and lollipops fall on the floor and children jump to collect them. It is funny and crazy when mothers help their children to collect the candies!  They also lay on the floor!  Prepare your camera, it is freaking hilarious!

How it all started?

The Merchant, Marco Polo, traveled from Italy to China, where he witnessed a very special celebration during the Chinese New Year.  The population used to break a clay pot covered with paper in many colors, as part of the festivities!

Marco Polo liked it so much, that he imported this tradition to Italy.  The Italians called it “pignatta”, which means “pot”.   Of course, they changed the date and meaning, and they started to break the pignatta during the Roman Catholic Easter holiday that is a period of fasting and prayer, called Lent (Cuaresma).  This  is a solemn religious observance in the Christian liturgical calendar  begins on Ash Wednesday and ends  before Easter Sunday or the last day of the Holy Week.  The Catholics in Italy used to break the piñata during this period as a symbol of breaking from sin.  In Guatemala we don’t break piñatas during the Lent.

How they ended up in America?

The pignatta traveled to Spain as part of the Catholic tradition during Easter.  Spanish priests that came with the conquerors, brought this tradition to the Americas.  But instead, they made the piñata clay pot as a star with 7 sides, replacing it as a symbol of the 7 capital sins.  It is at this time that they started to stuff the clay pot with sweets.   The spiritual connotation was that when we break from the 7 sins, gifts are falling from heaven.

Piñatas were made of clay and they are still made in Mexico in the same way.  In Mexico, they also use the star piñata during the “Posadas”, celebrated before Christmas.  Posada is a Pilgrimage procession of Joseph and Mary looking for a shelter, going every night from home to home hoping to find a place to rest and wait for the birth of Jesus, the Son of God.  Every house hosting Joseph and Mary organize a prayer ritual, sing Christmas songs with the guests, and prepare snacks for the participants of the procession. The last posada happens one night before the Christmas celebration.

In Guatemala, we have the same “Posada” tradition around Christmas Celebrations, but without a piñata.  However, we do use a piñata with the form of the devil during the 7th of December celebration called “Burn the Devil Day”.  Oh yes, we burn the piñata, but we stuff it with fireworks instead of candies!  This tradition of burning the devil comes from the colonial times but we started using a devil piñata at from early 90´s.  Before we used to collect dry wood and leaves called “Chiribisco”, to burn it.

Every 7th of December, at 6pm It is a preparation to clean the houses from bad elements and burn them in fire, in order to be spiritually ready before the “Immaculate Conception” day on the 8th of December.  The best place to enjoy the festivities around those days is in Ciudad Vieja, near Antigua, Guatemala.   Antigua, Guatemala, is also famous for burning a giant devil piñata.  The locals and tourists also go around the fire at 6 pm.  On the Burn the devil day, is when Christmas festivities begin in our country.

The revolution of the piñatas

During the 70’s, the way of making pinatas in our country, has changed.  Now they are made without a clay pot, but by shaping wires and covering them with colorful paper.  They are mainly copying cartoon characters from popular TV shows or movies, and crazy politicians!  People use customized piñatas also as a form of protest in demonstrations.  For example, if you want to protest corruption, you make a piñata in the form of a rat!

If you wish to visit the place where these funny piñatas are made, the artisans are based around Parque Colon in zone 1, not too far away from Central Market.