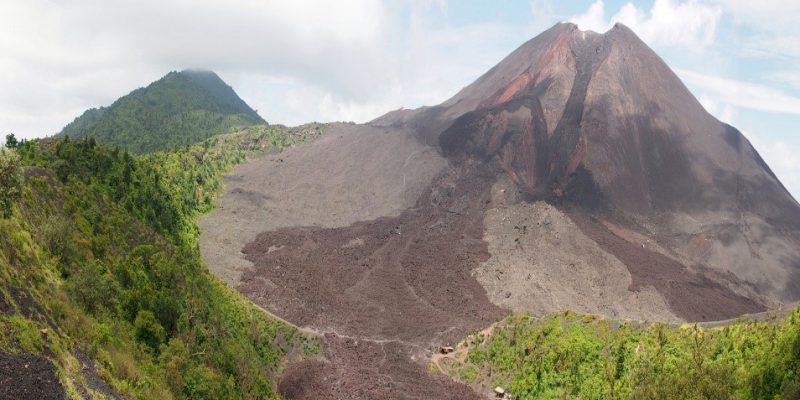 Want to climb a volcano in Guatemala but not sure if you have the legs for it? Then Pacaya volcano might be the hike for you. It’s a relatively short drive and relatively short hike compared with other Guatemalan volcanoes and the views at the top, for a little bit of effort to get up there, are truly spectacular!

Pacaya volcano is located approximately 40km South of Guatemala City and, depending on traffic, can be reached in around an hour and a half from both the capital city and Antigua. South on the CA9 through Villa Nueva and Amatitlan and then take the turn-off to Pacaya just before Palin.

Pacaya volcano is not like most Guatemalan volcanoes, which are generally single peak stratovolcanoes. Pacaya is a volcanic complex consisting of multiple eruptive centers that have been active at different times over the last 23,000 years. A few thousand years ago the ancient Pacaya stratovolcano blew itself apart and collapsed down toward the Pacific coastal plain to leave an enormous collapse scar. This scar has subsequently been filled by the various eruptive centers that now form the peaks known as Cerro Grande, Cerro Chico, Cerro Cabra and Cerro Chino. These peaks have all been active in the recent geological past. The currently active part of the volcanic complex is the Mackenney Cone.

It’s hard to believe but the Mackenney Cone has only been active since 1961. In less than 60 years it’s reached its impressive height growing up layer upon layer of ash and lava flows. The last significant explosive eruption was in 2010. The Mackenney Cone lost height during this eruption when it partially collapsed and opened a large crater at the summit. This collapse scar and summit crater have now been nearly filled in by the more recent minor explosive and effusive lava-flow activity.

Most hikes start from the park entrance in the village of San Francisco de Sales. The well-maintained trail takes you up through cornfields and forest with well places rest stops with views of the geothermal power station, the Calderas lagoon (the small lake in the depression or caldera from of the oldest part of the volcanic complex) and Agua, Fuego and Acatenango volcanoes. On the walk up, local guides will talk about some of the local plants and customs and point out the famous Palo Hormigo; the tree from which the keys of the famous Guatemalan instrument the Marimba are made.

The hike up to the unobstructed view of the active Mackenney Cone takes just over an hour but for those who don’t want to walk a local “taxi” option is available in the form of a horseback ride. Horses can be taken just up, or on a round trip up and down. Some people stop there but most go further and walk down on to the lower flank of the Mackenney Cone and the more recent (but now mostly cooled) lava flows. In some parts there is still enough heat coming off these flows to roast marshmallows!

Make sure you have enough water, snacks and sunscreen for a 4 hour round trip. If leaving from the park entrance in the afternoon for the sunset version of the hike, then make sure you have warm clothes and a flashlight for when the sun goes down. Most climb the volcano in sneakers but proper walking shoes or boots with a little more ankle support are always better. The loose ash can be quite slippery and the recently cooled lava flows are razor sharp so long pants provide a little more protection if you do slip and fall.

The summit of Pacaya volcano is off-limits to tourists. The explosive activity at the top generates lava bombs that are thrown tens of meters into the air and a change in wind direction can expose you to harmful volcanic gases. With a recent increase in lava flow activity there is also the temptation to get dangerously close to active flowing lava. Pacaya’s impressive volcanic activity can be appreciated in relative safety if you follow warning signs and listen to local park rangers, without putting yourself or others in danger.